I’ve had to give up running because of a truly joyful case of plantar fasciitis, so I’ve been walking instead. Came across this yesterday on my walk. And I thought the poison ivy hedge of one of my neighbors was one of the more prominent dangers in my neighborhood. I was listening to music but it was in between tracks, and I heard the nest before I saw it. 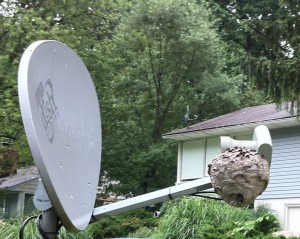 It’s hard to see any good coming from this. Sooner or later, the hapless owner of this dish is probably going to have someone go, Dad, the TV’s not working.

I have to admit a certain admiration for the incredible delicacy of the papery husk of the nest. Seems almost a shame to hose it down with insecticide. Flamethrower?

One thought on “Anyone Got a Flamethrower?”