Way back when (1988, to be exact), I bought, read, and loved James Salter’s book Dusk and Other Stories, which won the PEN/Faulkner Award for Fiction in 1989. So I was excited to hear him read when he accepted this year’s PEN/Malamud Award for excellence in the short story at the Folger last weekend. I have a fairly extensive collection of autographed books—this happens if you go to readings and writers conferences and tend to fetishize books—and soeven though I had made a mental note to dig up my Salter books, especially dusk, I could not find any of them for the life of me. If you know who James Salter is, you know that he is not a young man, although he seemed in fine fettle at the reading. Which means that I will likely have only limited opportunities to get him to sign my copies of his books—including my first edition of Dusk.

I searched everywhere, and I had in mind what the book looked like, but despite my search—it has been a long time since my books were alphabetized, or even since I had them all out of boxes and on the shelf—nothing.

So I went to the reading, which I enjoyed immensely, without the book. Yesterday, my companion at the reading directed me to a bookshelf, the one right by the door, and there, at eye-level, aching to be seen, was this: 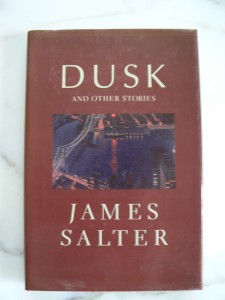 There wasn’t much that I could do at that point, although kicking myself came to mind. But more interesting than that, I’d say, was the question that my companion posed after the reading, as we were driving. “How many readings have you been to?” I said that I did not know. Perhaps 100, perhaps fewer. Perhaps more. When you’re at a writers conference, like Bread Loaf, where I was a fellow in 1993 and later taught, there are a lot of readings, and unless you just can’t get to one of them, it has always seemed to me that you are foolish not to go.

A couple stood out, I said. John Gardner reading with John Barth in either the late 1970s or early 80s. It was not long after Gardner’s book On Moral Fiction came out, which famously irritated a lot of writers who were dismissed by Gardner—don’t recall if Barth was one of them, but it seems likely—for not being sufficiently Gardner-like. Gardner had recently remarried, and Barth quipped that he wished the newlyweds “no moral friction.”

I was, and remain, a fan of both writers, and I had a number of teachers who had been students of Gardner’s. Barth’s The Floating Opera was, during my undergrad years, a major touchstone for me.

Another major touchstone for me was hearing Robert Coover read from his (one of) his masterpiece(s), A Political Fable, during a writers conference at George Mason, when I was an undergrad. He embodied that piece of work—a sort of satire on the 1968 election in which the Cat in the Hat runs for president, with all of the mad hijinks one would expect from the Cat in the Hat—in the most astonishing way. (At that same workshop were Edmund White and Lucille Clifton, both of whom taught me, in a few moments in small groups great things about writing.) Later, at a party, I will never forget Coover’s description of how he saw metaphor, closing his fist and then peeling his fingers back one by one to get to the heart of the matter.

When Bernard Malamud’s daughter spoke as she presented the award to Salter, she said that watching her father write was hardly a riveting experience. (There have been at least two memorable sendups of this, one by Monty Python, which she recalled during her remarks. There was another, but by whom it was written I do not recall, in The New Yorker, I think, about Joyce Carol Oates (it segued from her love of boxing, if I recall). (What a crappy sentence.))

In a certain way, every writer seems to me a doppelgänger of him- or herself. There’s the physical embodiment of the person who, when they’re writing, probably looks very much like a person at a desk, but then there’s the mind that exists in the words, which mind, while at that desk, is exploding with words and images that only s/he can see, and if you did not know what a given writer looked like, I would doubt very seriously that you could match the phyical embodiment of the person with the words. Imagine on the left a series of photos of authors, and on the right, snippets of text from their work, and your job was to connect the words with the person.

For me in a strange way, the reading plus the autographed book equals that line, connecting the two.

Here’s hoping that I have the opportunity to make that connection with James Salter again, one day.