In a recent interview with The Rumpus, Laura Miller of Salon (her work also appears in a lot of other places), was asked what she sees “as the major challenge facing book publishing today.” In response, she laid out a number of concerns and issues, all of which are worthy of more discussion (and it would be cool if she did an essay on this, because I’d love to see her expand her thoughts).

[It should also be said that she says a lot of other stuff that is worth reading—about personality and reviewing, and reading outside of her comfort zone—and totally worth reading, regardless of what you think of her reviewing habits. There being, as one old friend used to put it, no taste accountants. But I love this remark: “trust me, there is no joke so broad that there won’t be someone out there who’ll think you mean it seriously.” Happens every day.]

Each of the following “concerns” are direct quotes from her response in the interview. I’ve put what she likely just rattled off informally into a more formal structure, which means I could be seen as taking her out of context.  So be it.

Concern #1. The whole stratum of expertise embodied by agents and editors and booksellers might be lost in the disintermediation currently going on.

While this is a legitimate concern, to a certain extent, it’s a nonissue. I think Tim O’Reilly has it right when he said that “isn’t necessarily the old economic models that survive, but economies survive, and new players and models arise.” Read his post here. END_OF_DOCUMENT_TOKEN_TO_BE_REPLACED 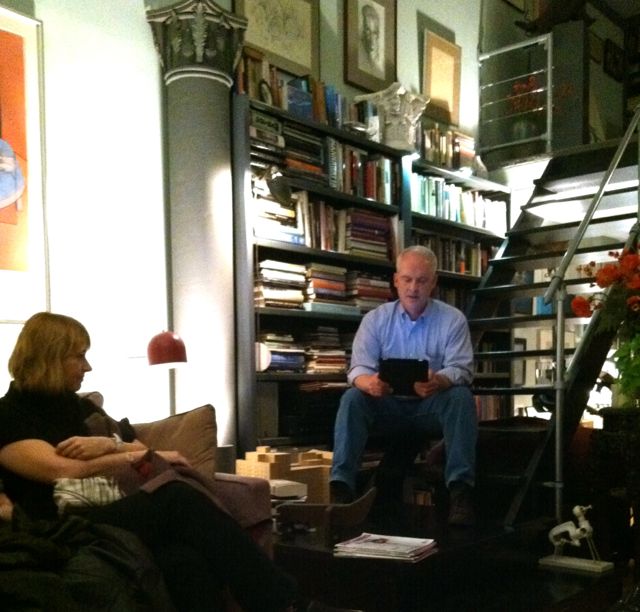 I want to thank the great folks from the Pen American Center for their Fall Literary Tasting event last Thursday, and Jack Dowling, in whose apartment I read. What a great idea, and what a great setting for a reading, or series of readings. In a lot of ways, I wish I could have been a spectator as well. My daughter saw Lev Grossman read in her pair of “tastings” and really enjoyed it. Wish I could have seen that. Think I would have liked it, too.

First time I’ve ever read from my work on my iPad, which worked out pretty well.

What should you be reading this season? Hear from Sarah McNally of McNally Jackson Books about the runaway hits, the beloved secrets, and the must-reads of the 2011 fall season. Then wander the halls of Westbeth to attend live readings in the homes of Westbeth residents by some of the most exciting authors writing today. Don’t miss this rare opportunity to explore the oldest and largest artist community located in the heart of bohemian West Village, repurposed by renowned architect Richard Meier into 383 living and working lofts. The evening ends with a reception and cocktails.

Tickets: $10. Purchase at ovationtix.com or at the door.

Really looking forward to this unique event. I love this idea. Like a wine tasting for books.

Doesn’t this sound cool? This is from my contact at Pen American: “the program will begin in the New School’s Auditorium, which is located on Bank Street. We will have signage and volunteers to direct them where to go. Sarah McNally, of NYC’s beloved McNally Jackson Bookstore, will address the audience for 20 minutes, before they are escorted by volunteers to the apartments for the intimate readings.”

Intimate readings. I almost wish I were just going to the readings.