I’ve been a huge fan of WNYC’s RadioLab since its inception. It’s some of the best use of the radio medium I’ve heard, and often a source or really fascinating Insights into science, some of which is often Just mind-blowingly cool. So that Jad Abumrad won a so-called genius grant comes as great news. I hope it means a lot more of the same.

Here’s the (very low budget, i.e., no budget) trailer for THE FINAL APPEARANCE OF AMERICA’S FAVORITE GIRL NEXT DOOR.

If you’re wondering who the lovely young woman is, it’s Jacqueline Dolan, my daughter. You can find out more about her here.

Of TFAOAFGND, and I think they look pretty good. But so I’m reading the first page, and thinking this is a killer first page, and then get down a few grafs and see, crap, a freaking typo. But this is what advance copies are for, or one of the things.

It’s a curious thing, a physical copy of a book that is going to be an ebook — all the heft you’d expect from a book that will, when it is finally published have no heft. 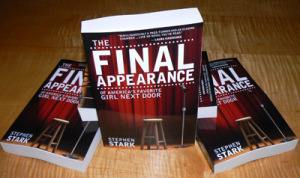 If you’re a reviewer or tastemaker, thought-leader, or just a general bon vivant (you must have evidence of status as bon vivant), shoot Margaret an email at margaret@shelfmediagroup.com and request a copy. You might get lucky.

Okay, it’s a bit of a hyperbolic headline, but still, if you’re in Big Six publishing, you have to be a bit concerned about your business model.

When you look at the numbers, it seems pretty clear that Big Six publishing seems to be headed to a place it does not necessarily want to be. Publisher’s Lunch has a fascinating piece on Amazon’s effort (subscription required) to come up with a subscription service. In describing the plan, which would give Amazon exclusive rights to “to offer free access to wide swaths of backlist ebooks to Amazon Prime members,” Michael Cader writes that, for most publishers, it’s a nonstarter:

Publishers who have already declined told us the exclusive was one of the easy reasons to not even consider the plan, with one person suggesting that the scheme is directly targeted at taking customers and share away from Barnes & Noble.

The thing that really struck me was, however, this:

…most traditional publishers are trying to uphold the value of selling authors’ work at a price that supports a professional process and allows for broad investment in the funding of new work.

For standard trade publishers who license individual works from authors (and through agents), the structural, rights and relationship obstacles are manifold.

Later, there’s a quote (unattributed) about how disruptive the scheme is “to the economics that we know are working.” Which seems to me the real problem facing Big Six publishing these days. The economics may be working at this moment, but how long this moment will last is anybody’s guess. Especially when you consider how fast sales of ebooks are overtaking trade books. In March, Hachette Livre reported that nearly a quarter of US sales were from ebooks. According to Publishers Weekly, ebook sales jumped “167% in June” and:

The major trade segments took big hits in June due in part to the closing of more Borders stores. Trade paperback sales had the largest decline, down 64%, while children’s hardcover sales were off 31%. Adult hardcover sales fell 25%, mass market sales were down 22% and children’s paperback was off 13%. Sales in all the trade segments were also off by more than 10% for the first half of the year.

This concerns me for obvious reasons — I’m a writer and my novel is about to be published by Shelf Media Group only as an ebook. How this came to be so has as much to do with serendipity as it does with any actual design. It’s going to be very interesting to see how this works out. We know that publishing is going through a major, major shift and, like global warming, that shift would seem to be happening at a faster pace than anyone anticipated.

I used to work in publishing many, many years ago. I keep saying, “I used to know how publishing worked, but I don’t anymore.” I’m guessing that’s true of a lot of people these days. Even those who do.

Interesting story on The Millions : Why Are So Many Literary Writers Shifting into Genre? by Kim Wright. “Once upon a time,” she writes,

genre was treated as almost a different industry from literary fiction, ignored by critics, sneered at by literary writers, relegated by publishers to imprint ghettos. But the dirty little and not-particularly-well-kept secret was that, thanks to the loyalty of their fans and the relatively rapid production of their authors, these genre books were the ones who kept the entire operation in business. All those snobbish literary writers had better have hoped like hell that their publishers had enough genre moneymakers in house to finance the advance for their latest beautifully rendered and experimentally structured observation of upper class angst.

Seems to me that her somewhat ironic and overstated take is accurate.

From my perspective, one of the issues In ghettoizing books into genre is the perennnial need to arm a sales force with some handle to sell books. Got a treatise on treating corns and bunnions? No problem whatsoever for the sales force. That is something that people with corns and bunnions need. Nobody, in the strictest sense, “needs” fiction. So, got a novel with a lot of baseball in it that’s not baseball? Who, in the strictest sense, needs that? Got a novel about

I don’t think it’s entirely new that “mainstream” literary writers are “shifting” into genre (and neither does Wright). I kind of think all of this is sort of coincidental. In my own case with my new novel, THE FINAL APPEARANCE OF AMERICA’S FAVORITE GIRL NEXT DOOR, I could not have told the story I wanted to tell without a bit of genre-bending. The funny (to me) think about all of this is that we’d totally accept such excursions if we saw them in the movies, but it is somehow a Problem in selling a novel.

To me, this seems just another way that mainstream (i.e., not indie) publishing has chased itself So far up a very tall tree that it’s no longer very easy to see the ground.